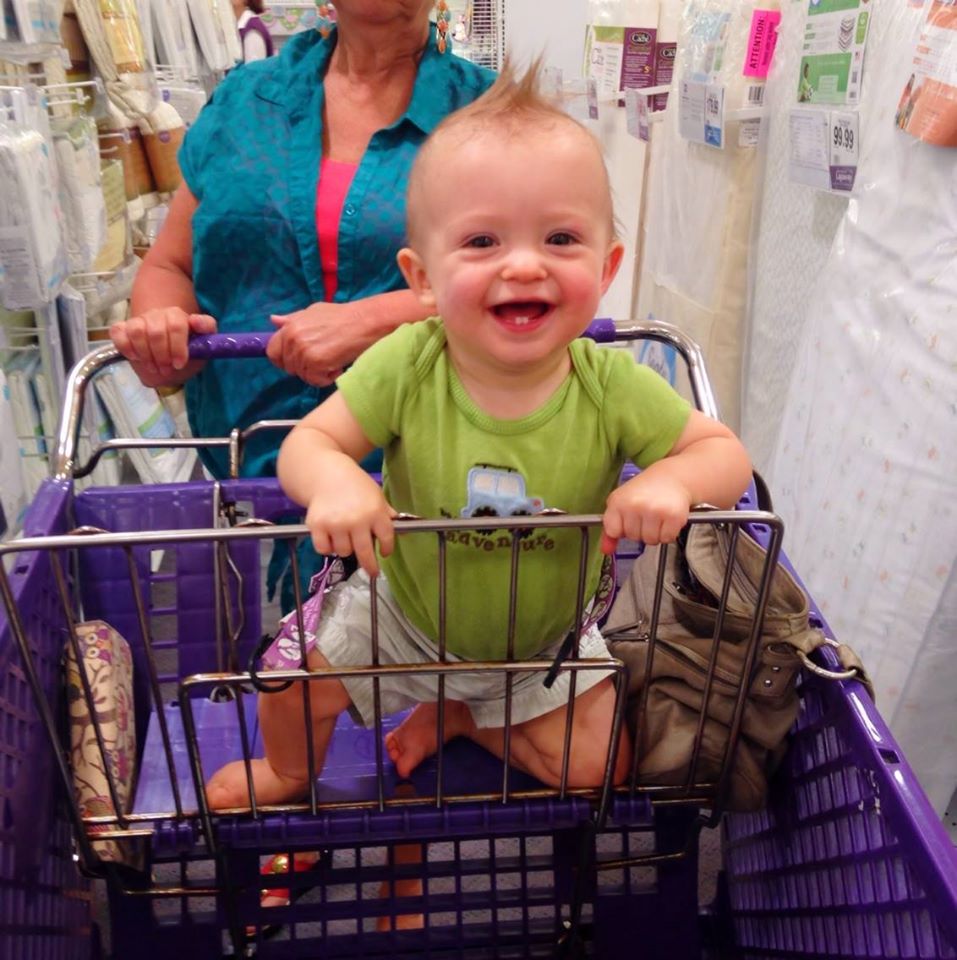 Please excuse me while I crawl into a cupboard and cry my face off because my sweet little miracle baby is already a year old!

He’ll be a year old in less than a week, but we celebrated his birthday over labor day weekend so anyone who wanted to travel would have that extra day to get home if they needed it.

My husband chose the safari party theme, gave me a budget, and away I went planning, preparing, and pinning like cray-zay. I had so much fun, and I was absolutely thrilled with the results. Everyone at the party inflated my ego like whoa, complimenting me on the food, decor, and basically paying me off for all of my hard work.

So I thought today I could pay it forward by giving you all of the deets and the links to the places and things I used to make this safari party all I wanted it to be and more. We had somewhere between 40-45 people at the party, and we had the perfect amount of food with zero leftovers.

I will add all of the recipes on one card at the end of the post so you can save the recipes to Ziplist or print them all at once so you will have everything for your very own safari party all in one place. 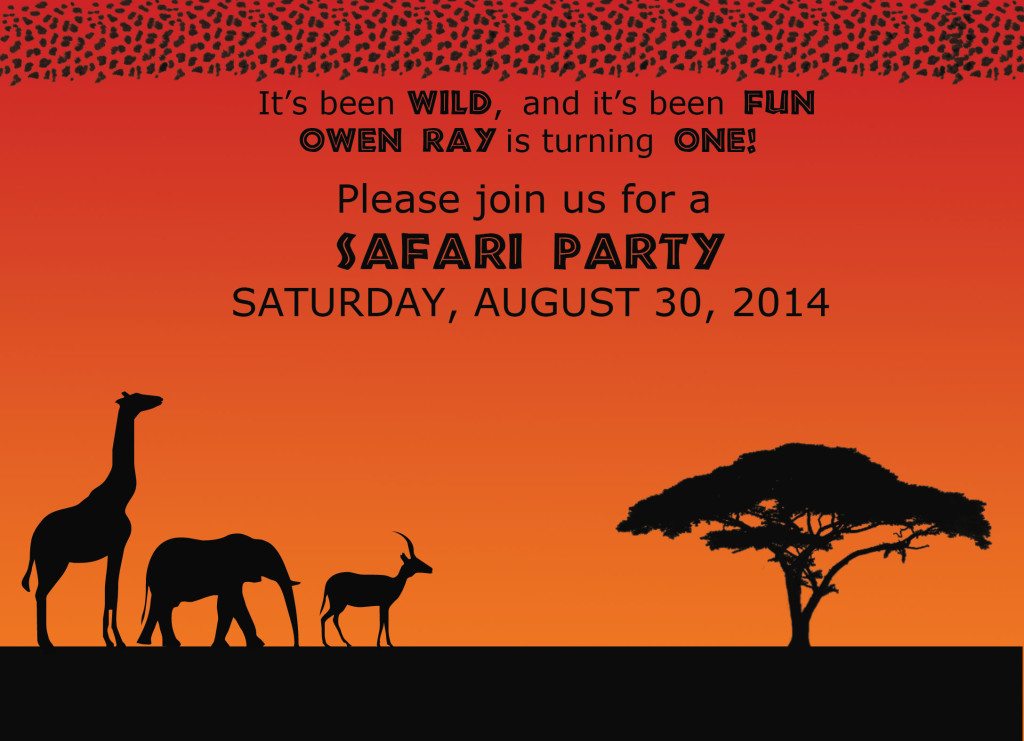 First things first, you can’t have a party without a great invitation. I designed Owen’s in Photoshop by downloading a free African tree brush pack and a free animal font as well as a safari-esqe font. I then had them printed for a great price and shipped to me within a reasonable time. I ordered orange envelopes

to match, and they were practically perfect in every way!

I say practically perfect because I’m a bobo and completely forgot to add what time the party started, and we also had a bit of a mishap with the first batch of printing due to a printer’s error.

Luckily one of our cousins pointed out the time mistake very quickly (but too late to get them reprinted), and I was able to Facebook everybody on our invite list and give them the time. Overnightprints also was very professional about my issues, and they reprinted them without any problems and reshipped them to me for free. 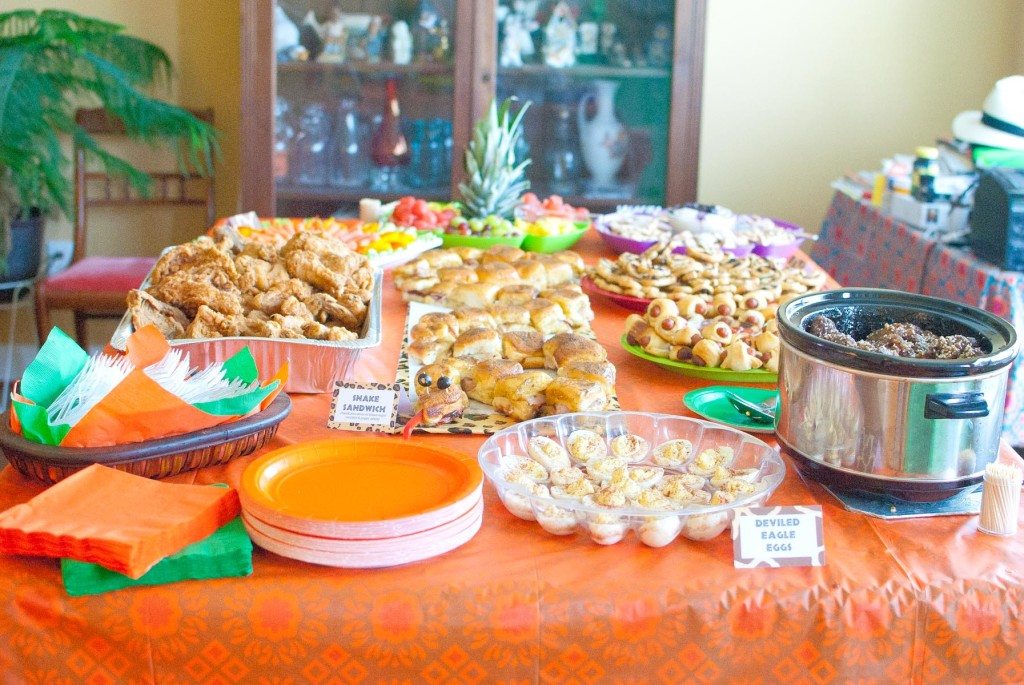 Next up was planning the menu. As you know, I have some serious back issues so I tried to plan things that were quick, easy, and delicious. I also made myself a strict timeline so I could make and freeze some of the food ahead of time in order to just throw them in the oven the day of the party.

It was super smart, but my back still hurt for daaaaaaaaayz afterwards.

The menu was completely safari themed, and I had such a blast putting everything together. 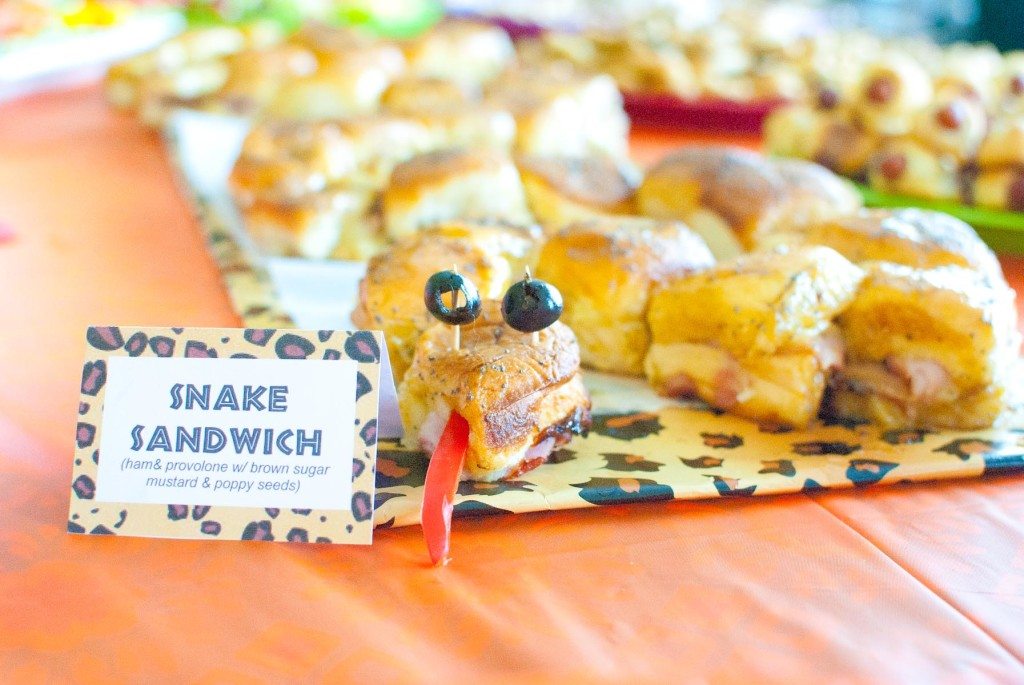 The snake sandwich sliders slithered their way into the stomachs of my guests, and they were an absolute smash.

The recipe is a cinch and you may have even seen them called funeral sandwiches at some point because the original recipe blew up Pinterest several years ago. I’ve made them a ton, and they are always the first thing to go at a gathering. 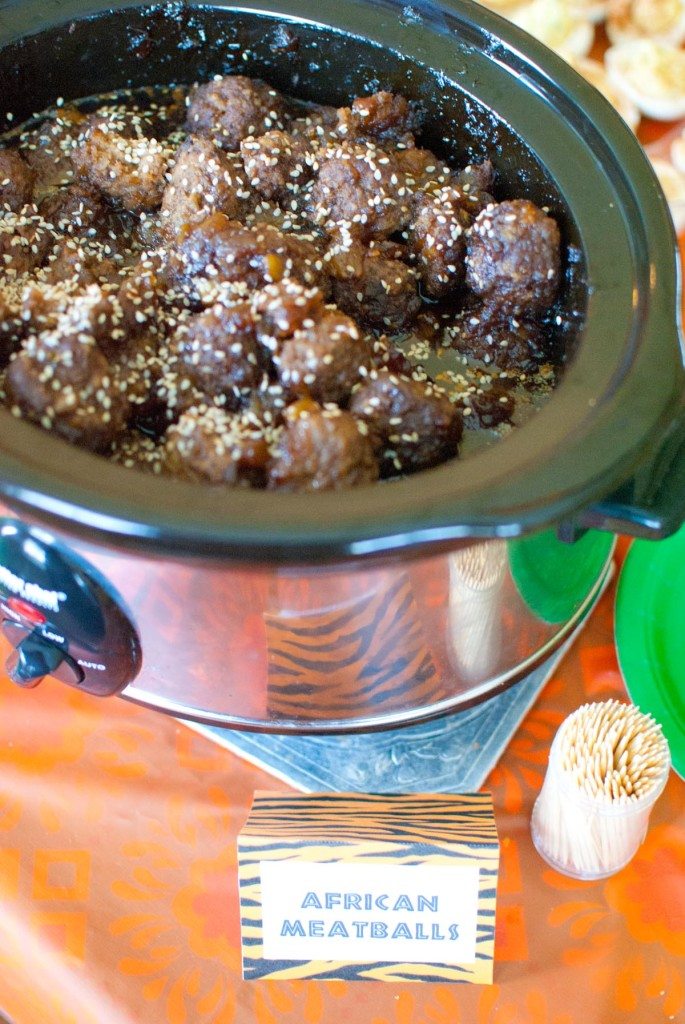 The next biggest hit were the meatballs which I adapted from this recipe from Gimme Some Oven as well as this one from The Crockpot Ladies.

These things were incredible!!! I probably ate about 457 of them before I ever served them to my guests. They were more like Asian meatballs rather than Afrian, but whatevs. They were the bomb diggity. 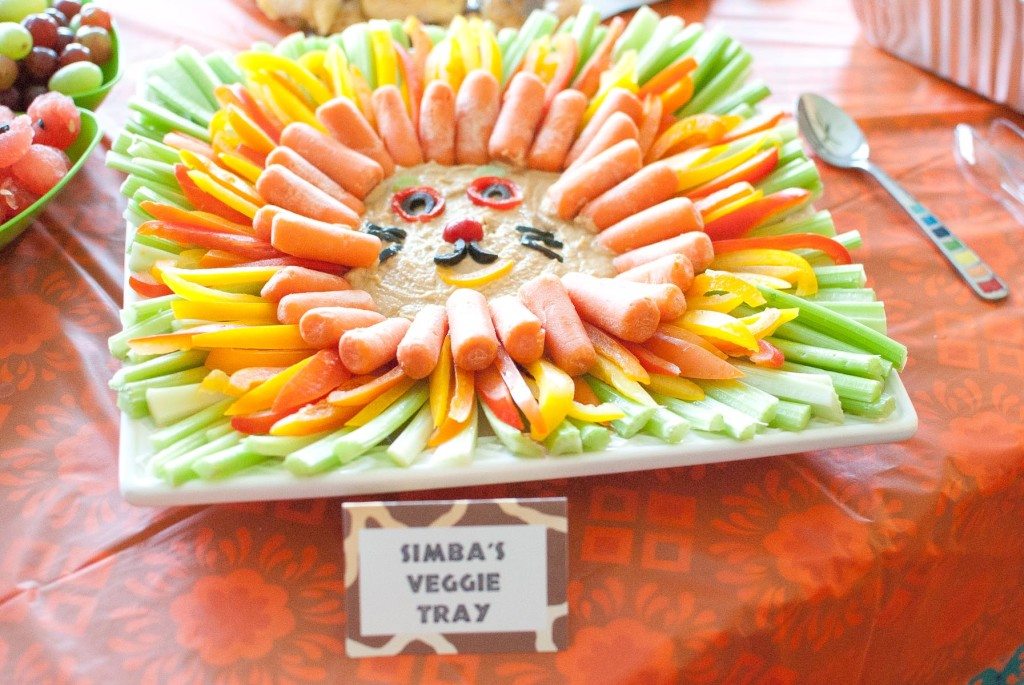 Next up was Simba’s lion veggie tray. People were so impressed by it , but it really couldn’t have been simpler. Some people even commented that they didn’t want to eat it because it was a work of art.

I can’t take credit for it though! I found the idea on Pinterest. 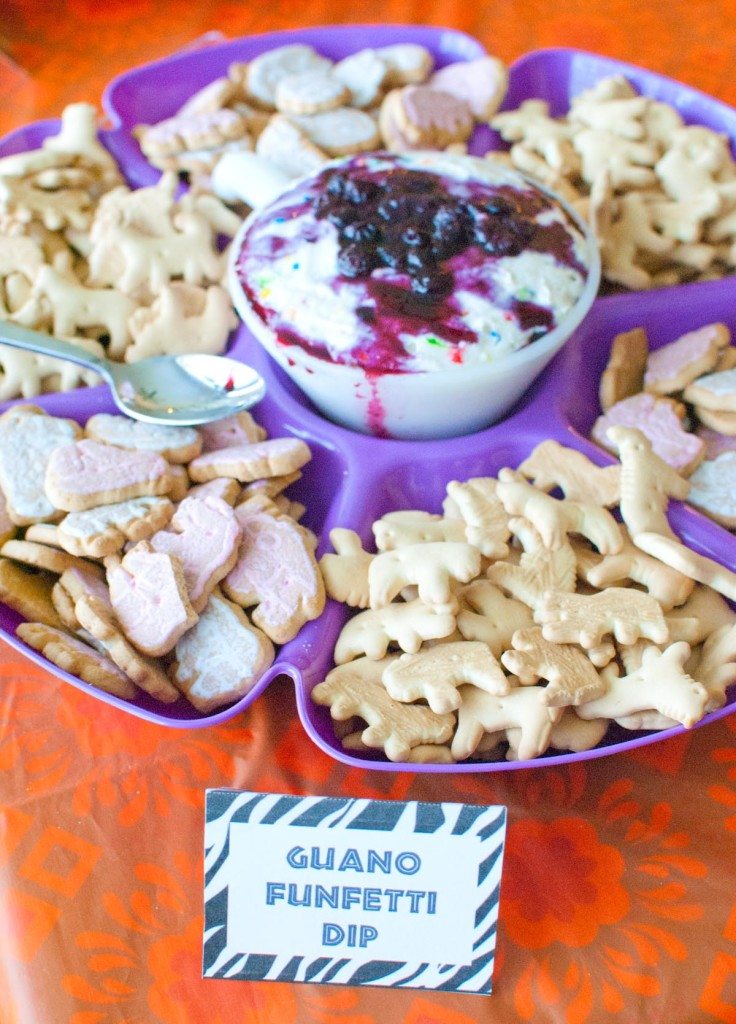 The “guano” funfetti dip was my husband’s idea, and I thought it was disgustingly hilarious. Y’all know what guano is, right? #googleit

With our over abundance of blueberries, I couldn’t resist, and it ended up being pretty good.

I originally got the idea from this recipe on Eat Yourself Skinny, but I used homemade whipped cream and vanilla yogurt instead of plain. I also served it with full-fat and iced animal crackers because, why not?

Although it was pretty tasty, I probably wouldn’t make it again unless I did everything from scratch. I’m not sure if it was the chemicals or the baking soda in the boxed caked mix, but it made your mouth tingle and got so thick that it made you feel like you were eating cold, raw cake batter. 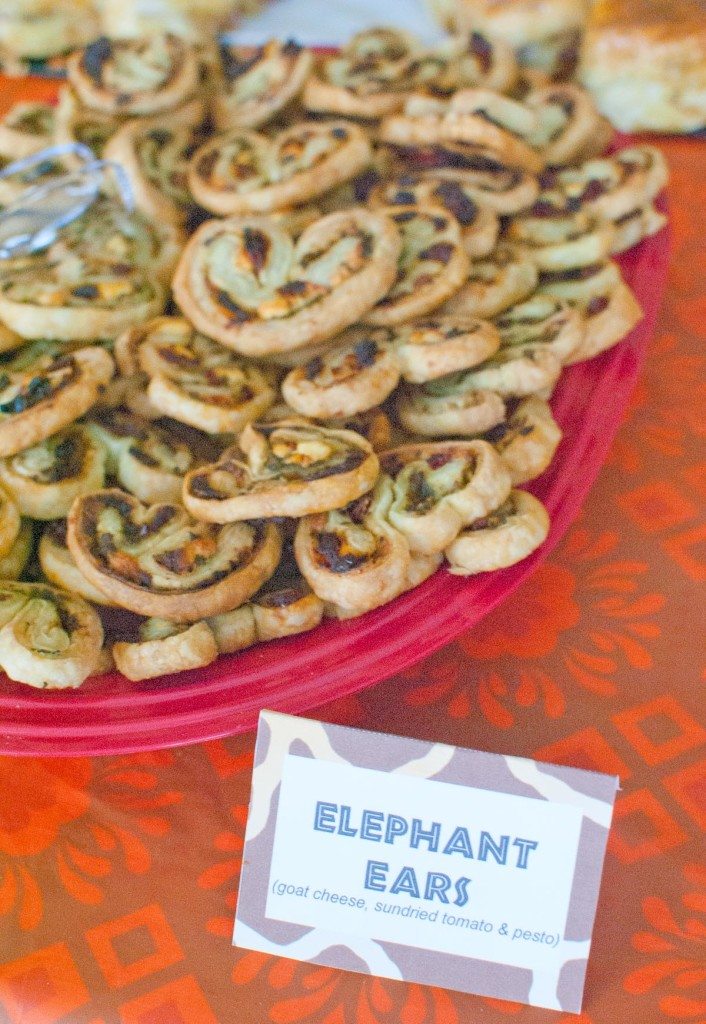 Next up were the “elephant ears” or savory palmiers which are a recipe from Ina Garten on the Food Network. These were made with puff pastry, pesto, sundried tomatoes, and goat cheese. This recipe was one that I made in advance, cut, froze, then baked on the morning of the party.

Now that I think about it, we did have some of these left, but they were quickly eaten up by my parents later that night as we all sat on the couch exhausted after the day’s festivities. 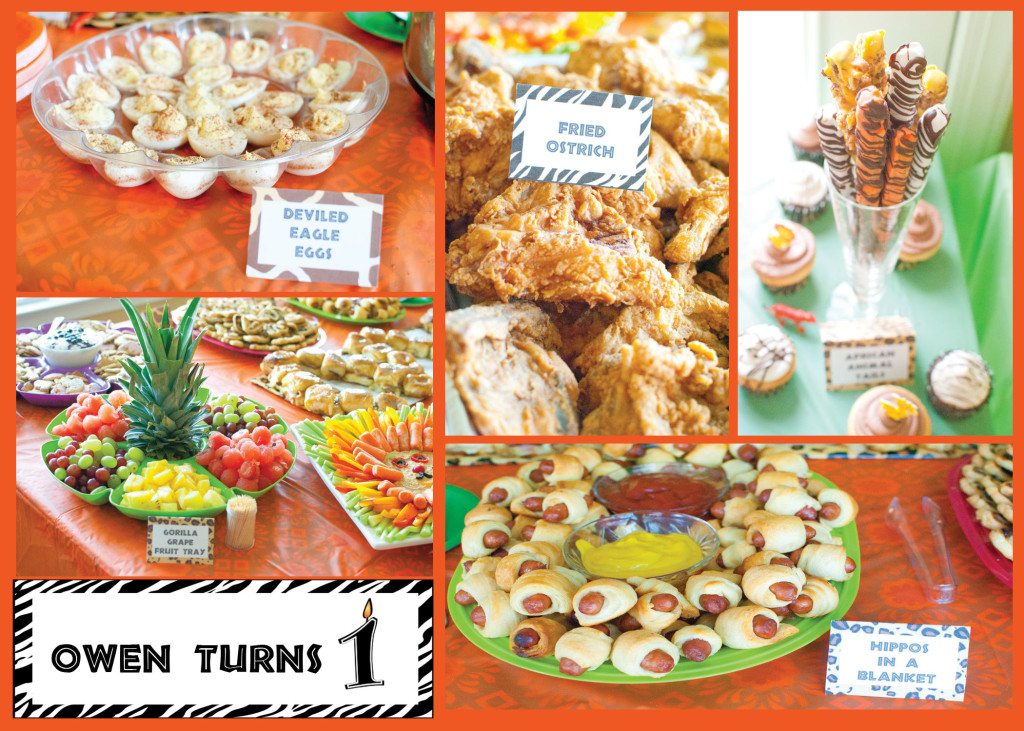 The remainder of the menu was just some basics: deviled eggs, fried “ostrich” from our favorite chicken joint, chocolate covered pretzel rods that looked like tiger, zebra, leopard, and giraffe tails, a fruit tray, and “hippos” in a blanket that I made several days in advance, froze, then reheated on the day of the party. 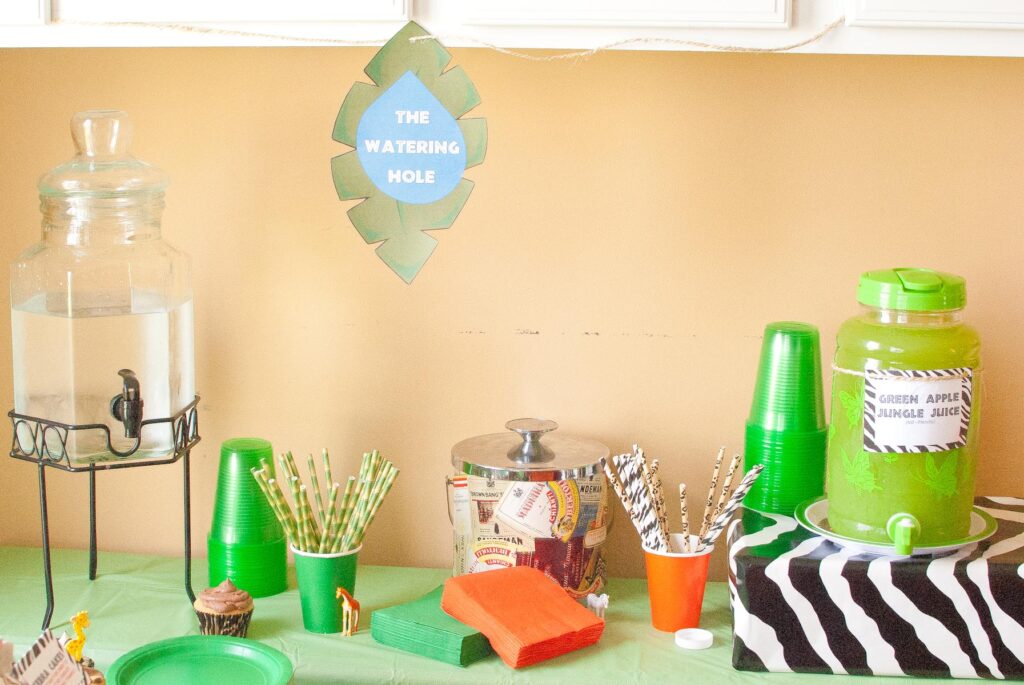 and zebra and leopard print straws. The green apple jungle juice was sweet and tart with just enough added fizz. We didn’t have too many kids there so if you plan to have a larger group, I would suggest doubling the recipe. 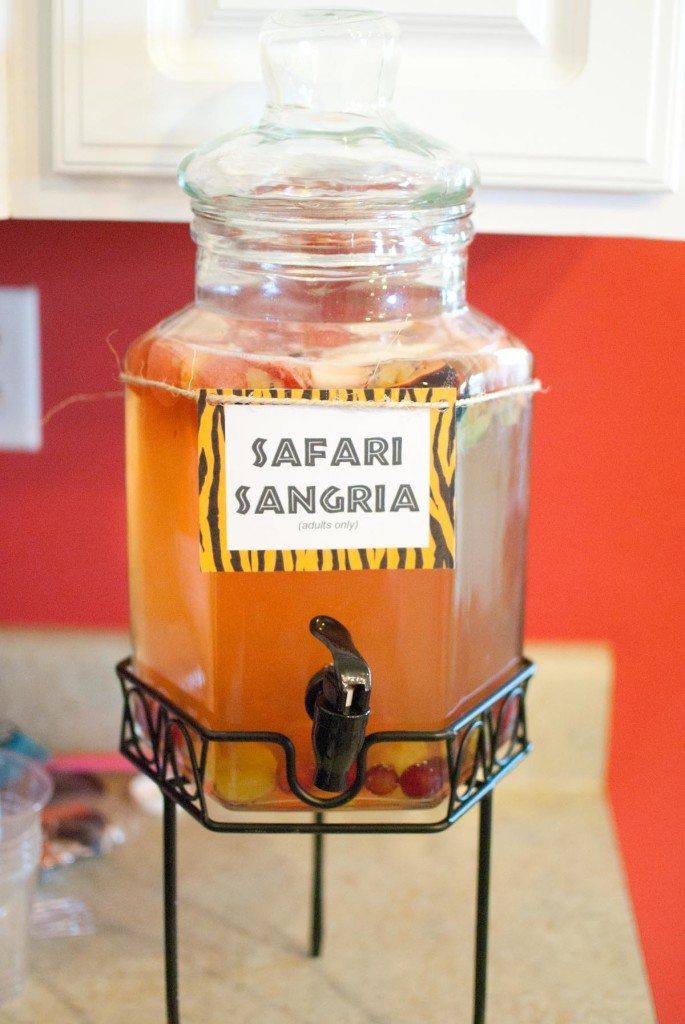 For the adults I had a Safari sangria that was completely swoonworthy. I soaked kiwis, watermelon, grapes, strawberries, peaches and plums overnight in half a bottle of Smirnoff Sorbet Light mango passionfruit vodka then added that to the rest of the drink, and dear heavens I could swim in that stuff all day long. 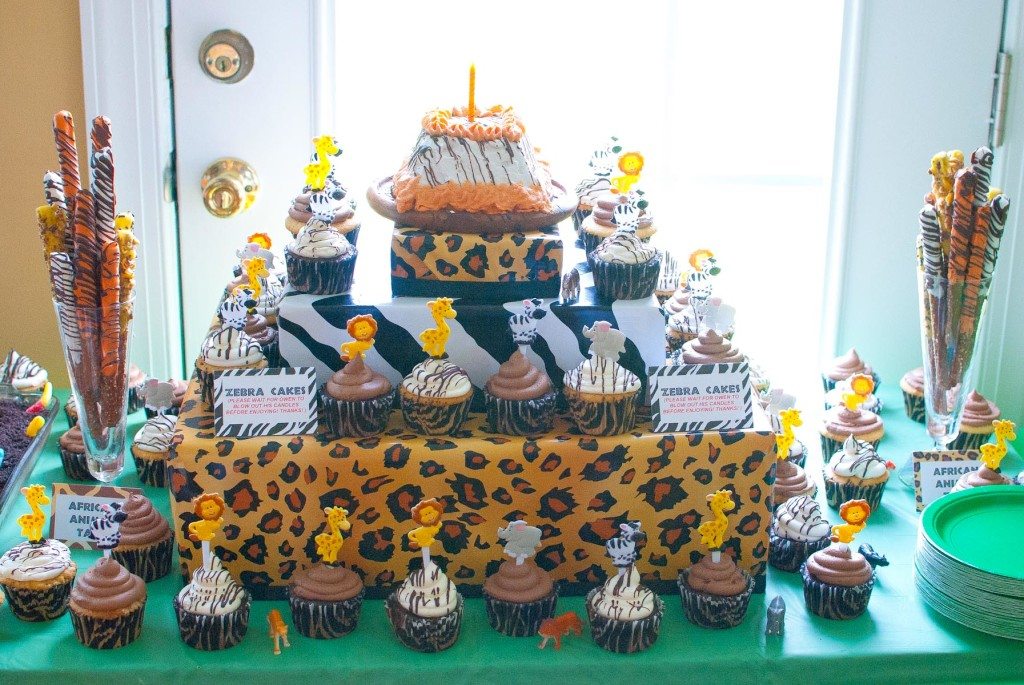 Last but not least were the cupcakes! I was so happy with them. First off, the cupcake stand is nothing but cardboard boxes wrapped in dollar store wrapping paper, stacked, and taped together with duct tape. I also hot glued a ribbon around the bottoms of each box.

I got the cupcake toppers (along with the majority of the decorations) from this website and the cupcake wrappers from Walmart.

I made one double batch of my go-to chocolate lover’s cupcakes (cake only) using Jessica’s recipe from How Sweet Eats, and I also made one large batch of vanilla from The Little Kitchen. In total I ended up with about 65 cupcakes.

I made the cupcakes on Thursday, stored them in cupcake containers

and frosted them with chocolate and vanilla buttercream on Friday night. So all I had to do on Saturday morning was give the vanilla cupcakes a chocolate drizzle, arrange them on the stand, and add the toppers. 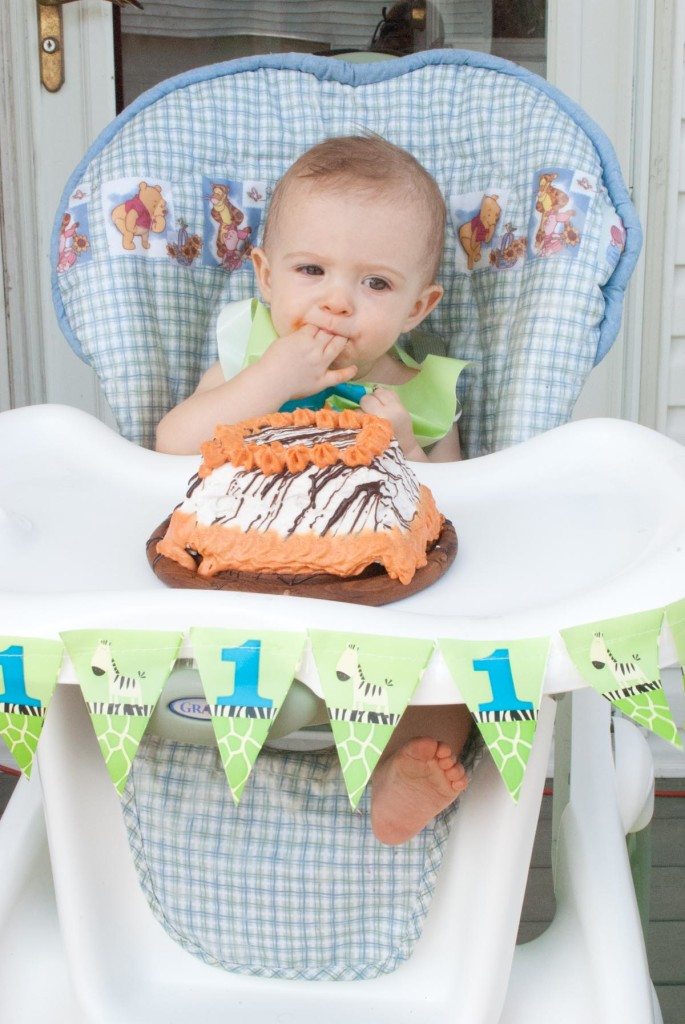 Owen had a gluten-free, grain-free, refined sugar-free smash cake with coconut whipped cream frosting, but I’m going to have to give you the recipe later b/c I left it back in NC and I’m at home in Charleston at the moment.

Since Owen has been feeding himself from the beginning, he didn’t really go too crazy over his cake. He didn’t really smash anything, but we’re going to give him the real deal (probably using Jessica’s funfetti cupcakes this time) on his actual birthday so maybe he’ll tear that one apart instead. 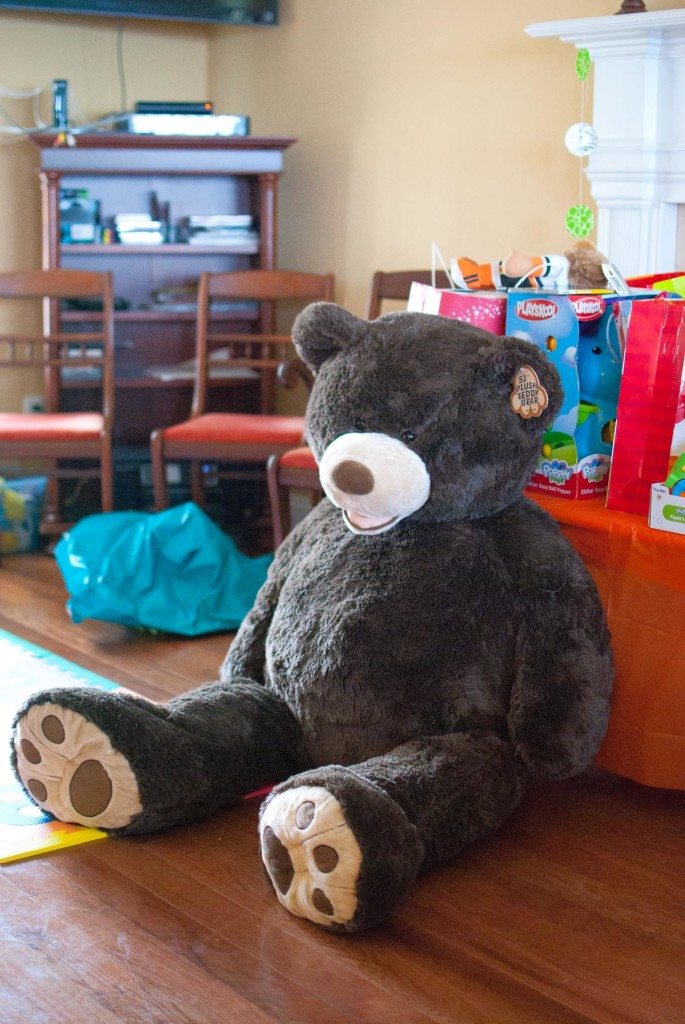 Owen got a ton of wonderful gifts, but his absolute favorite was the giant teddy bear that is bigger than I am. This teddy bear was given to him by his great aunt who has given one of these to each of the great grandchildren in the family.

Owen can’t get enough, and he likes to bite the bear’s nose. 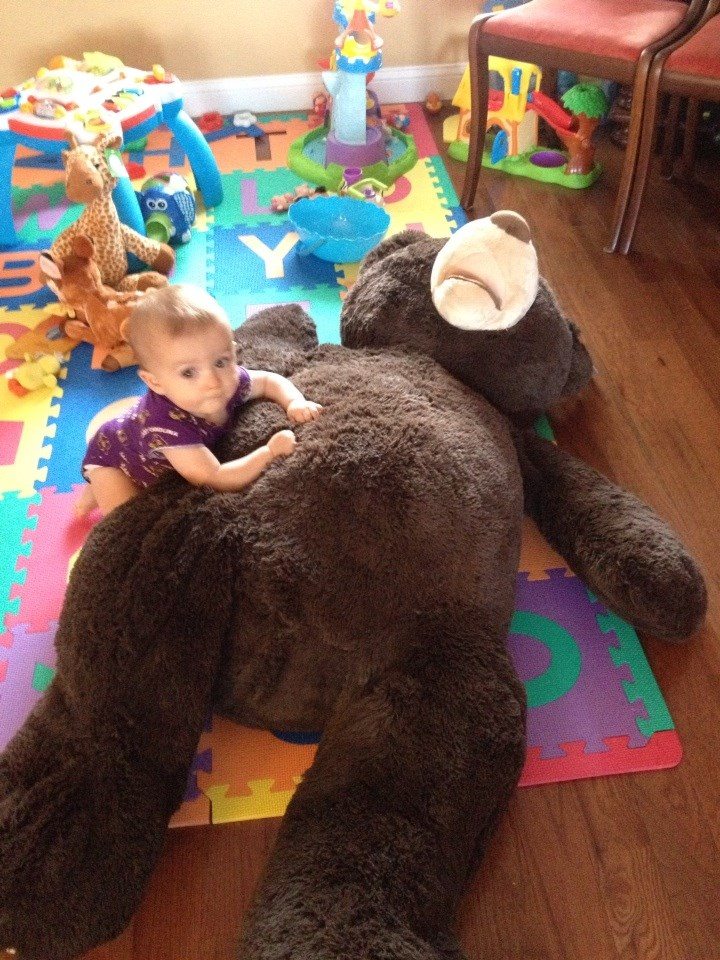 Well, I think that’s it! I know it’s a ton of information, but I’m hoping this post will help a mom like me who wants to throw an amazing safari party without having to scour the internet for every single little detail.

You can just book mark this page and have all the links, recipes, and ideas stored in one place and make things a little bit easier for yourself.

For the African Meatballs:

For the Green Apple Jungle Juice:

For the Safari Sangria:

For the Snake Sandwich Sliders:

For the African Meatballs:

For the Green Apple Jungle Juice:

For the Safari Sangria:

*Disclosure: By following the links above and completing a purchase, Slim Pickin’s Kitchen may receive compensation via discounts on products or monetary means from the respective affiliate programs*

The Skinny On Me Week 20: Practically Paleo

The Skinny On Me: Cooking a Bun in the Oven