These peach cobbler martinis are a fun twist on a traditional southern peach cobbler and would be a great addition to any afternoon cookout or picnic.

What's better than finishing off a perfect southern meal with a bowl of warm peach cobbler?

Why, cooling yourself down with an ice cold peach cobbler martini for the first and last course, of course!

Basics for a peach cobbler martini:

Basics for a peach cobbler cocktail:

The hubs even liked them, and he doesn't drink liquor! So that's saying something, y'all.

Now take note: You *MUST* include the cinnamon brown sugar rim on these peach cobbler martinis. They are a NECESSITY when it comes to the flavor of the drink. Without the sugared rims, well, something something was just missing, and it left the martinis feeling a bit lackluster.

With that being said, these drinks can be a bit on the sweet side, so if you aren't a bit fan of sweet, you can always cut the sweetness, I suggest either adding a splash of prosecco OR a bit of club soda. That should do the trick. 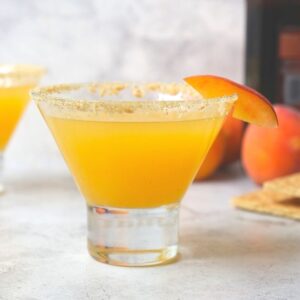 For the Peach Cobbler Martinis:

For the Peach Cobbler Martinis: