This King Cake Pecan Praline Puff Pastry is a show stopper! Glittery and gorgeous in traditional colors of purple, gold, and green, this puff pastry replicates the look and flavors of a traditional Mardi Gras King Cake, but is ready to eat in 35 minutes or less!

Puff pastry is my jam.

It is also delicious when filled with jam, but today we're making a Mardi Gras King Cake filled with a rich, toasty, and buttery pecan praline crumble and the components of a good 'ole cheese danish.

Is your tummy grumbling yet?

So peep this: Did y'all know Mardi Gras King Cake originated in celebration of the coming of the 3 Wise Men and the birth of Jesus Christ?

The tradition of King Cake is said to have started in France around the 12th century and eventually made its way down to New Orleans. The custom begins the "Twelve Days of Christmas" on Christmas Eve and continues until January 6th to "King's Night" or "Epiphany" when Jesus first met the 3 Wise Men. Then Carnival and King Cake season officially begins and ends on Mardi Gras (aka Fat Tuesday), the day before the start of Lent.

Traditional Mardi Gras King Cake is a sweet yeasted dough filled with cinnamon sugar and shaped into a circular cake to represent the route the 3 wise men traveled to meet King Jesus. It's then sprinkled in royal colors of purple, gold, and green and represents justice, faith, and power. Tradition also includes a plastic baby, coin, or pecan hidden in the dough and whoever finds it becomes King for a day and the host of the following year's celebrations.

How cra-zay is that?!? I've never heard that in my life. Especially considering how risque Mardi Gras has become!

Get togethers to celebrate the birth of Jesus is totes my kind of party, and I went ahead and took the liberty of a few shortcuts so we could save time and energy and feed our faces this incredible pecan praline puff pastry pronto. I also skipped the component of the hidden trinket because I don't want my rambunctious preschooler to choke on it, but this king cake is filled will a boat load of pecans so everybody wins!

Store bought puff pastry is the way to go here because the remaining ingredients are homemade and are where the flavors fly. The main two tricks to this king cake recipe are with the toasting of the pecans and the braiding of the puff pastry.

The pecans need to be toasted before going into the filling because it brings out their natural flavors. To toast, spread the pecans out on a baking sheet and pop into a preheated oven. While they're toasting, make the cream cheese filling so you can keep an eye on the pecans ensuring they won't burn. Toast the pecans for 3-4 minutes or until you can smell them cooking. The second you smell their toasty aroma, pull them from the oven, and set aside to cool.

The braiding of the puff pastry is so incredibly simple. Cut diagonal lines along both sides of the pastry, starting a half an inch or so from the filling, then fold in each strip one at a time alternating between right and left.

That's it! See? Super simple. Just as I promised. 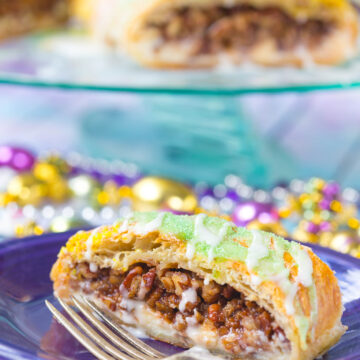 For the Pecan Praline Puff Pastry:

For the Cream Cheese Filling: