Kick the can to the curb and make these slow cooker baked beans in the crockpot! The added splash of sweet amaretto, large hunks of thick, smoky bacon, fresh veggies, and herbs will revitalize your homemade baked beans game!

I can't tell you how many times I've Googled "homemade baked beans" just to find a recipe that's nothing but a couple of cans of beans zhuzhed up with some tasty little add-ins.

Uuuum...can someone please explain to me how that constitutes homemade?

Don't get me wrong I love me some jazzed up beans like Mama F makes every Memorial Day and Fourth of July, but come on now! Canned beans with stuff tossed in them do not equal homemade.

Owen loves baked beans, but I really don't like giving him beans from cans because they're loaded with sodium and ick. I've always wanted to try my hand at making homemade baked beans so making them in the slow cooker seemed like the thing to do, especially since Fourth of July is right around the corner!

These slow cooker baked beans are even more lazy lady-friendly because I incorporated Jenn's crockpot black bean technique which completely eliminates the added step of soaking the beans overnight! Just make sure the water is HOT, HOT, HOT from the very start.

How to Make Baked Beans in the Crock Pot

I'm usually not one to cook things in a pan before throwing them into the crockpot, but I did fry the bacon and the veggies beforehand because the thought of raw bacon cooking in the slow cooker gives me the skeeves.

Once cooked, I threw all the goodies into the crock pot to cook low and slow. And, yes, throw those bacon drippings in there. My grandmama would slap me silly if she knew I let that good ole flavorin' go to waste!

Baked Beans with Amaretto and Bacon

These beans are an easy make for a picnic, family cookout, or Fourth of July soiree!

Of course, if you're using this recipe for a ministry meal or church potluck, it's perfectly fine to leave out the amaretto. The alcohol does evaporate out when cooked, but rest assured it's totally an optional ingredient.

I also made sure these beans were naturally sweetened with real maple syrup and, aside from any sugars that may be in the booze itself, this recipe is completely refined sugar-free! Serve 'em up in a retro bean pot and watch them disappear. 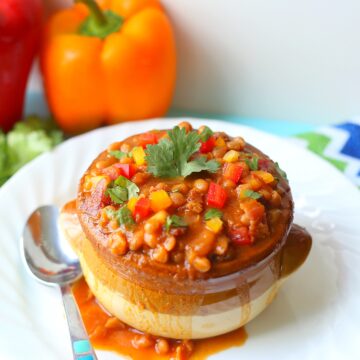 PS. These would be KILLER with my pumpkin cornbread w/ whipped gingerbread butter. Hashtag swoon.

Some other side dishes you may love...