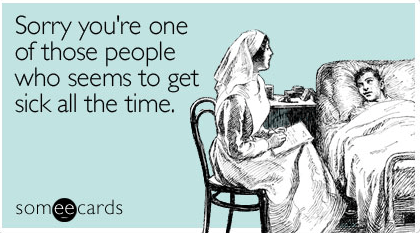 1. I'm going to have to take a break from recipe development b/c I'm too weak to do anything more than go downstairs and peel an orange...and even that wears me out.

3. I still wasn't able to make an appt b/c they haven't received in my medical records from SC yet...FML...

4. I'm doing a 7 day cleanse that I'm hoping will knock out some of this sickness. I blended the veggie soup we are supposed to eat in the food processor last night which made it look like barf...but at least it tasted good. I did have to eat it away from my MIL though b/c she couldn't take the sight of it!

5. I'm on day three and have already lost three lbs!

6. I flipped the eff out yesterday morning and had a full blown temper tantrum mostly because I felt like death and I didn't want to wake up at 7am to get ready to go to a real estate class, but also because my husband didn't bring me a cup of coffee when he made himself one. Grrrr...(yes, I'm a spoiled brat).

7. When you are on a 7 day fruit & vegetable cleanse, it is not a good idea to play on Pinterest and stalk the food and beverage boards for hours and hours on end. Just sayin'...

9. Ugh. My husband took a picture of some chickens crossing the road yesterday which really perturbs me because A. I've been waiting for that opportunity for weeks after I failed to take a shot the first time it happened b/c it is frickin' hilarious and totally sums up where we live and 2. Because I wasn't in the dang car with him to witness the hilarity...grumble, grumble, grumble...

10. Have you met Colonel Meow yet? You're welcome.

11. Do you have any tips on how I can get more followers on Facebook, Instagram, Twitter & Pinterest? Get down on my knees and clean the feet of my readers with scented oils and spices? I ain't skeered.

12. I've fallen completely behind on reading my favorite blogs. I wonder if they know I'm dying from rabies?

13. I've almost blown through every single episode of every single Investigation Discovery show on Netflix. What in the world am I'm going to watch after I'm done with Disappeared?!?

14. My mom put a pair of fuzzy purple socks with the grippy pad thingys on the soles in my stocking last Christmas, and I didn't put them on for the first time until about a week ago...and I've been wearing them every day since. :/

15. I watched Footloose (the real one) last night for the umpteenth time and got teary eyed when Ren McCormick was reading dancing scripture at the city hall meeting. What in the world?!?

16. My cousin has taken a trip to upstate New York and keeps posting status updates as to how frickin' cold it is up there, and I keep thinking to myself...what in the crap did you expect?!?!? Palm trees and sunshine?!?!? 😉

17. My brother and sister-in-law are expecting their third child in July and it is so weird to think that I will be an aunt again very soon. I'm so excited and can't wait to spoil that child rotten.

18. I am desperately in need of some NICE black leggings that aren't like the cotton ones I got from Walmart a few years ago that I have managed to poke holes in somehow.

Where do you buy your leggings?

Do you watch Investigation Discovery?

Are you following me on the social media sites mentioned above (hint, hint)?