This is the best, super easy, most delicious London Broil recipe! It's great to serve as an inexpensive date night option, an impress your guest dinner party, or a quick weeknight meal to feed the fam.

If you like to eat steak for supper or want to serve up a fancy Valentine's Day dinner at home, London Broil is an excellent meal to make.

Not only is it much more affordable than ribeye or New York strip, but London Broil can be just as enjoyable as the more expensive cuts when marinated and cooked correctly.

Here's a crazy piece of knowledge: London Broil is not the actual name of the cut of meat, but instead the name of the preparation style. Whodathunkit?!?

Top round or flank steak is the traditional cut of beef that is used for a "London Broil" because the cut soaks up and tenderizes so well in a marinade.

There is a restaurant here in Charleston that serves a sirloin steak I just adore. The California Dreaming marinated sirloin is submerged in a delicious melody of fruit juices, garlic, soy sauce, and spices and is then grilled to perfection.

My London Broil marinade mirrors the California Dreaming marinated sirloin and gives the steak a deep, gourmet-style richness without the restaurant prices.

How to Cook London Broil

This London Broil recipe is excellent for quick weeknight dinners, a gorgeous Valentine's Day meal, or even a fancy-schmancy dinner party with a few friends.

Here's how to cook London Broil:

Tips on How to Make London Broil 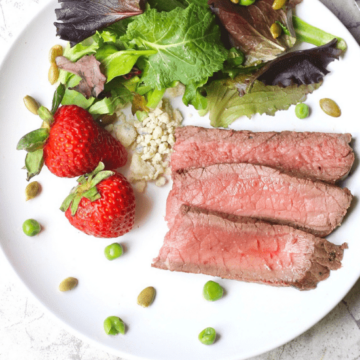 For the London Broil Marinade:

How to Cook London Broil: